New Orleans is known by many names: the Big Easy, New Orleanians like to take it easy. Life seems to slow down here and people take the time to get to know one another; The Crescent City, the mighty Mississippi River cuts through the heart of the city and give New Orleans it the  unique shape of a crescent moon; The City That Care Forgot, Some say this name comes from the idea that people can forget their cares here, others say that the name refers to New Orleans’ history of trials and tribulation.

One Of The Fastest Growing Cities In America

Making countless top 10 lists, The Big Easy has become a top spot to not only visit, but to live. And why shouldn’t it be? Located on the Gulf Coast, the city serves as a natural gateway. And relatively low taxes and low costs of living make it a no-brainer when you consider the incredible amount of contributions the city has to offer.

No matter the time of year, there is always a festival going on somewhere in New Orleans or on the Northshore. The people of New Orleans celebrate everything from the Day of the Dead to the well known Mardi Gras hoopla every spring. You can be assured, If you’re here on a weekend, there’s a strong chance that a festival is going on somewhere and that means great music, incredible food, friendly people, and strong drinks.


A City for Adventure

Once you get to the city you will want to explore! Taking tours and reading brochures are great and support the economy but if you want to get to know the city, you’ll want to get out and discover for yourself the mysteries that the city of New Orleans holds within her myriad of neighborhoods and nooks.

The city holds a wonderful old world quality that makes this particular activity so much fun. Pick a somewhere like the French Quarter or Uptown, and just see what you can find. Consider bringing a bike or at least good walking shoes. 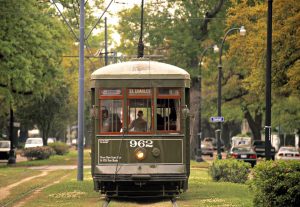 New Orleans is famous for it’s streetcars and rightly so as they have some serious history. Its St. Charles line, known as the green cars, serves as the oldest continually operating public rail transportation in the entire world! Most cities in the country updated their streetcar lines and trolley cars to buses, however, New Orleans, ever hesitant to embrace change, decided to keep its major streetcar lines adding to the ambience that now infiltrates the city. Due to the popularity, cost efficiency, and low pollution of the green line streetcars, new lines, known as the red cars, are currently being added throughout the city and more are in the works for the future.

New Orleans has no hills, if you don’t count the man-made levees and Monkey Hill at the Audubon Zoo, making it a perfect city for biking. Recent road reconstruction in the city has created almost 100 new miles of bike paths and has made bike lanes on most of it’s major avenues. It’s one of the more fun and easier ways to get around and now the city offers bike kiosks where you can rent a bike in one place and return it at another.

New Orleans has become one of the most visited cities in America. The culturally rich city offers a large variety of major attractions, from the electrifying clubs on Frenchmen Street and the old-world charm of the French Quarter to the oak tree lined, St. Charles Avenue (home to both Tulane and Loyola Universities) and many of the stately 19th-century mansions.


A City of Water 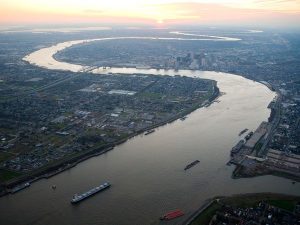 The city is located in the southeastern most tip of Louisiana with the Mississippi River cutting through it’s heart.  The state of Louisiana is known for some of the best fishing in the country and NOLA is built around water.  Many people fly into New Orleans to take a fishing charter out of Venice LA.

New Orleans It is bordered on one side by the manmade Lake Pontchartrain to the north and the Gulf of Mexico to the east. New Orleans is named after Philippe II, Duke of Orléans, Regent of France, and is one of the oldest cities in the United States. The city is known for its multicultural heritage as well as its music and cuisine, and is considered the birthplace of jazz.